Our Manager, Sandy Kerr, is still working to support our clients safely during the pandemic, when computer access has never been more vital.
Sandy can deliver sanitised, adapted computers to your door and talk you through set-up on the phone.
Browse our website to find out more about our service.

You are here: Home / What we do / Personal stories

In our clients’ words… 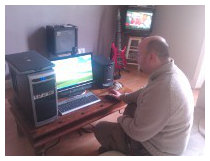 From the very first contact with Pass IT On I found them to be really helpful and easy to talk to. They showed a real interest in me as an individual and in how they could best meet my needs as a client.

I have been a musician most of my life but, because of my mental health problems, I haven’t been able to play with other people. I have also written a great deal of my own music but haven’t been able to record any of it. The computer I was given by Pass IT On has opened up a whole new world for me. I can now record my music at home. I recently wrote the music for a short film that focused on mental health issues, it just had its first showing at the Filmhouse in Edinburgh. I’ll never forget sitting in the audience watching the film and listening to the music I’d written, I never imagined I’d ever have the opportunity to do something like that. I’ve now had interest from other film makers and I’m starting work on my first album.

I really can’t thank Pass IT On enough. The help and support that they gave me was second to none and the avenues that have opened up for me because of the service they provide have been truly life changing.

The service I received from Pass IT On was brilliant, especially Sandy, who visited me and took the time to find out exactly what I was going to use the computer for. It means I can go and do things on my own and is helping me with my spelling and to research things for school projects.

Phil is in his forties and visually impaired. We were able to provide him with a system that included a 30” monitor. He explained:

I think the service is fantastic. I couldn’t get a computer without Pass IT On because of cost restraints. I now have the freedom to enjoy games on a larger scale despite my visual problems.

Monique has ME. She told us:

My computer was on the verge of breaking down. Pass IT On gave me a new one which safeguarded my future, as I rely on my computer to shop and communicate when I’m housebound. I use email to keep in touch with friends that I can’t get out to see.

Calum, one of Pass IT On’s clients.Calum’s father, George, sent us the following letter: 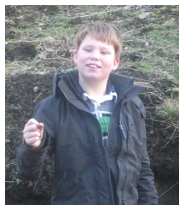 I am writing to thank your staff for the wonderful service you gave us by providing us with computer equipment. Quite literally, this has opened up a whole new world for my 12 year old son Calum, who has autism. You supplied us with a fantastic free computer, adapted mouse and printer which have enabled Calum to develop skills much quicker than we had anticipated. His computer has become a part of his everyday life and we have used the computer in educational tasks and playing games stuff too. His manual dexterity has improved and his fine and gross motor skills are much better as he uses the PC every day now. He is even quicker on the mouse than I am! …At first Calum used a large mouse with a coloured keyboard which got him interested in playing with the new computer. In a few weeks he was able to use a ‘normal’ mouse and off he went on his journey of computer enjoyment!

We found Pass IT On staff to be friendly, motivated, compassionate and enthusiastic and I would recommend people to take advantage (in a nice way!) of this brilliant service. To date, we have never had a problem with Calum’s computer and believe me, it gets used every single day. Many thanks for all your help.

Angela was 11 when she received her computer. In her feedback she commented:

Pass IT On is a fantastic service. I can now turn on my computer and renew my books at the library, play games and write a letter.

Great service, very friendly staff. I don’t have TV, so it’s absolutely great for me. I can browse on the internet and find what I want to watch or get favourite pages. I can play some games and I’m able to decide what I want to do on the computer and do it on my own.

Victoria has a severe visual impairment as well as both learning and physical disabilities. She said: 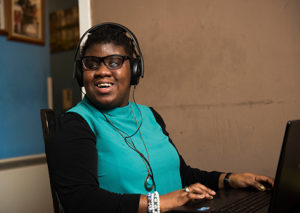 I enjoy using my computer and spend more time at home with it with my family. I can use my hands very well and it has made me much more independent. My siblings play music with me.

Find out more about how to apply for an adapted computer from Pass IT On.