Our Manager, Sandy Kerr, is still working to support our clients safely during the pandemic, when computer access has never been more vital.
Sandy can deliver sanitised, adapted computers to your door and talk you through set-up on the phone.
Browse our website to find out more about our service.

You are here: Home / About us / History

Pass IT On was set up in 2002 by Martha Lester-Cribb, BCAc and Sandy Kerr, BCAc.


Between us we have spent many years working with people with disabilities. Sandy was the IT manager for a large disability organisation and Martha was involved in researching the use of communication aids for people who can’t speak. 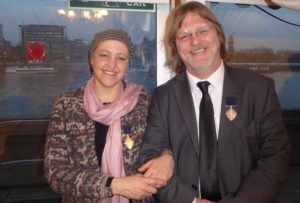 As computers became more a part of everyday life and more people with disabilities were moving into community-based houses, we saw the potential for computers which were being discarded to be adapted and given to people who otherwise wouldn’t be able to access the benefits they offer.

Lottery funding kick-started the organisation, and since then a combination of charitable trusts, grants, sales of surplus computers and other fundraising activities have allowed us to keep up this valuable work.

We are grateful to everyone who has helped us along the way and we continue to grow.  We are extremely proud of the progress we have made to date and are thrilled that we have managed to help over 500 people so far. However, we know that there are still many who are simply unable to access publicly available computers but whose quality of life could be improved by having a specially adapted computer that they could use in their own home.

Find out how you can help.